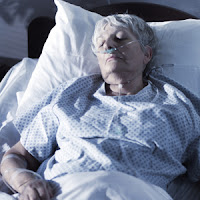 Naomi looks weary and haggard. She looks as if she has spent countless nights in a hospital besides her 85 year old mother with stage IV ovarian cancer which is indeed the case.

“I had to come in and see you today. I had to steal an hour for myself. I’m not even sure the last time I took a shower. Good thing the girls are self-sufficient. Although my husband’s been great. No complaints there.” Pause. “But now there’s my brother. I don’t know if he thinks he’s the knight in shining armor, but he’s decided he’s going to save our mother. By prayer.  As long as I don’t ‘kill her’ in the meantime. Does he actually think I don’t want her to live? I’ve spent years of my life trying to keep her alive; years trying to make sure she had the best quality of life. But she’s dying. She doesn’t even know who we are any more. It’s enough. It’s enough already.”

Internally I flinch at my patient’s words: “It’s enough already.”  Those were the same words my late husband spoke when he decided that he had tried everything possible to halt the progression of his cancer and that he was ready to let go. I would, of course, respect his wishes, but the finality of the words took my breath away. Steeped in remembering, I struggle to bring myself back to Naomi’s current reality.

“Your mother never made her final wishes known?” I ask.

“No, she didn’t. Every time I tried to bring it up, she’d change the subject. She couldn’t tolerate dealing with the reality of her own death. Well, you know how my mother was, never wanting to deal with reality, her head always in the sand.”

“So now you and your brother disagree about what to do.”

“Yes, I am. I’m almost too tired to be angry, but I am. I’m not sure when he got so high and mighty religious and it’s not like I’m talking about killing Mom, just withdrawing treatment and allowing her to go peacefully. You’d think his God would welcome that.”
Did you and your brother ever see eye to eye?”

“As children we were very close. I was like his second mother. But then he moved away and I stayed put and I gave my parents grandchildren which he never did. I guess that made me the favored child.”

“Yeah, I know what you mean. So you think I should be more understanding of my brother?”

I flash on an incident that occurred when my beloved grandfather died and the samovar that had always been promised to me was taken by my uncle, the less-favored child. “Being more understanding doesn’t mean you’ll be any more comfortable with what your brother is doing. I guess I’m concerned that this battle with your brother is going to divert you from grieving for your mother.”

“That’s true. Right now I’m more involved with feeling angry with my brother than dealing with my mother’s death. And it’s only a question of time before she dies, regardless of what we do or don’t do.”

“So how do you feel about her death?”

“But I’m not sure he knows it. And I have no idea how I’d talk to him about it.” Pause. “But you know what I said about it only being a matter of time until she dies anyway. Maybe I should listen to myself. Maybe it doesn’t matter all that much what we do. Death will do what’s it’s going to do, regardless.”

“I’m impressed, Naomi. That’s certainly taking yourself out of the fight with your brother.”

“The only problem will be if she lingers too long and suffers.”

“Yes, that would be a problem.”

“But maybe I can just wait and see what happens and try to opt out of fighting with my brother.”

This was a very courageous gift to your colleagues I hope will serve you in moving through your stages of grief. This is a very interesting vignette to me in that it is very hard for children to not suffer survivor guilt when a parent who has used a child to defend against re-living their early narcissistic injuries cannot be rescued from their mortality. We could make the case that your patient could not help but want her dead if keeping her alive under such circumstances is killing her off. I'm not sure how I would deal with her any differently than in your usual skillful manner, however I am struck by how important it is for your patient to normalize and own such wishes so that she does not have to disown and disavow this part of her and fight against it as if her brother has a monopoly on this reaction formation. They need each other more than ever.

How generous and courageous of you to post a vignette that inevitably triggers associations to the loss of a such a central figure in your life. I hope it serves you to move through your own stages of grief.

First off, I don't know if I have anything to add beyond this being an example of your sensitively attuned and clinically adept work. I feel for both children as they both appear to be potential victims of survivor guilt of a parent who cast one child as the "good one" to save her from a life of ownership of her limitations; a life she perhaps believed was not worth living. These siblings need each other and yet I can understand how your patient could feel compelled to fight against her own disowned and disavowed reaction formation located inside of her brother. I wonder if she is capable with your help to own and normalize in part the desire for her parent to die because to not rescue her in life she has learned is tantamount to leaving her to die.

Thanks for your kind, sensitive feedback and insightful thoughts, Mitchell. It is always good to read your comments.

It is interesting that the split the mother made with her two children when they were little - good and bad, or at least not as good - are now being replayed at the time of her dying, except the good/bad split is reversed.