Trevor sits quietly in the chair across from me. After a few moments he says, “It was an okay week. Nothing special happened.”

I wait. There is silence. I’m puzzled. I have seen 26 year old Trevor for many years. I might even say I helped him grow up. When he first came to me he described himself as shy. During those years long silences were commonplace. But as he moved away from his fear and self-loathing he’s been far more engaged with me and, to a lesser extent, with the world outside my office. He acknowledged his gayness and was able to come out to his family and some of his friends. He’s still never been in a love relationship, a problem that we’ve been working on. But today his silence confuses me.
“Is something going on, Trevor?” I ask. “You seem particularly quiet, uncomfortable.”
He shakes his head and looks away from me. 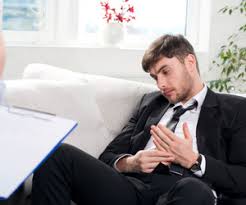 I wait. I think about our last session. Did something happen that distressed him? We’d been talking about Thanksgiving with his family, but that had seemed to go fairly well despite his father’s usual blustering. Was there some tension between us? Nothing that comes to me. Don’t be impatient, I tell myself, just sit with him.
After a while he says, “I’ve been thinking maybe I should cut back to once a week. I’m doing pretty well and, like today, I don’t have much to say.”
I’m stunned. In all the years, Trevor has never asked to come less frequently and, in fact, has often asked for additional sessions. Something must have happened between us.
“Trevor, you need to tell me what’s going on. Did I say something last session that distressed you?”
“Why does something have to be wrong? Why can’t I just want to cut back?”
“Because you know as well as I do that there’s always a reason – usually more than one – for everything we do.”
He sighs. “Why did that psychiatrist retire?”
“What psychiatrist?”
“The one next door.”
The light dawns. He asked me last time what had happened to my neighbor. When I told him he retired, he obviously became fearful that I might follow a similar path. “He retired because he wanted to travel, have more time to himself, pursue other interests. And, no, I have no plans to retire, ever. I love what I do and as long as my mind is still with me I plan to stay right where I am.”
“And why is the sign on your door different? What happened to the other therapists? The ones who’d worked here? Did they retire too?”
Now we’re in more difficult territory. I’ve been surprised by how few patients have asked me about the change of signage on the front door. “No, Trevor, they died.”
His already pale skin blanches further.

“Okay,” I say in a calm voice. “I understand that you’re frightened of losing me. First you were afraid I might retire and now you’re afraid that I’ll die. And of course I can’t make guarantees about my dying, but it’s certainly my hope to stick around for a long time.”
“I have to cut back to once a week. I have to become less dependent on you. Right now if something happened to you I don’t think I’d survive.”
“Trevor, the idea is that our work together will help you to be able to be more and more engaged with people other than me, but we can’t accomplish that by your cutting the frequency of your sessions. You’ve been doing very well lately, going out to lunch with people, meeting friends for dinner and a movie …”
“But that’s because of you!” he says. “I wouldn’t be able to do that without you.”
“Then we’ll have to understand why you feel you can’t do those things without me and help you to feel more comfortable being in the world.”
“Did they know they were going to die?”
Loathe to provide too many details, I say, “Yes, they both knew they were ill.”
“So they could tell their patients?”
“Yes, their patients knew they were ill.”
Trevor starts to cry. “I couldn’t stand it! I couldn’t stand it if you died! I couldn’t watch you die.”
“I understand, Trevor, but I’m not ill and I’m not planning to die any time soon. Obviously none of us know when we’re going to die and it’s always sad to lose someone we love, but what we need to do is focus on helping you to be fully in the world, to embrace life and enjoy it.”
“Can we talk about this again next week?”

This hits too close to home. I feel like I talk about this every other session


I wish you the best.