The Heart Is a Lonely Hunter

The pick for my book club last month was Carson McCullers’ The Heart Is a Lonely Hunter. I had never read the book before. I am only thankful to have read it now.

This was Carson McCullers’ first novel. She was 23 years old 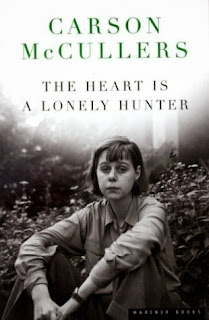 when she wrote it. Set in rural Georgia in the late 1930s, it brilliantly captures the conditions that existed in a poor mill town where ruin was just around the corner and everyone struggled to survive, whites marginally better off than “Negroes” who were forced to deal with constant humiliation and degradation.

The novel’s sociological portrayal is superb. But, as a psychologist, I prefer to focus on the five major characters and their interaction.

The pivotal character of the book is John Singer, a deaf mute, who all the other characters depend on to listen to them, hear them, and understand them, while projecting onto him all their needs and wishes. For me, John Singer is the book’s analyst. The reader knows Mister Singer to be an isolated, lonely person, whose only friend, Antonapoulos, is sent away to a mental hospital and even when he is present, Singer creates this friend to fill his needs, just as the other characters do to Mister Singer himself. Although it is never clear what Singer does understand, he is portrayed as a caring, generous human being.

Biff Brannon is the owner of the town’s café, a café he keeps open all-night to diminish his own loneliness and those of his possible patrons.  He is in a loveless marriage, but still grieves for his wife when she dies: “… when there is love, the widowed must stay, for the resurrection of the beloved – so that the one who has gone is not really dead, but grows and is created for a second time in the soul of the living …” There is no one who is a regular reader of these blogs or, even more so, of my book, Love and Loss, who would wonder why I vibrate to those words.

Jake Blount, an angry, misshapen drunk, who talks constantly of his Communist principles, is consumed by loneliness. His incessant talking and drinking is an attempt to escape his isolation; his anger a way to distance himself from his despair and sadness. Both Singer and Biff are invariably kind to Jake, giving of themselves both personally and financially.

Doctor Copeland is the town’s “Negro” doctor, another disappointed, angry, embittered man who is both difficult to like, and impossible not to sympathize with. Educated and scholarly, he has put all his hope in his four children and the capacity of the Negro people to raise themselves above their lowly status. He is bitterly disappointed in both. His behavior towards his children was often hard to read, at least for me, who knew first-hand the rage and expectations of an angry father. And, yet, who could not feel for this man who had spent his life trying to better himself, his offspring, and his people, only to be faced with repeated contempt and horror.

I have left Mick Kelly for last, because she my most favorite character, a 13 year old tomboy at the beginning of the book who has tremendous spunk and an obvious artistic and musical talent. She dreams of something more than the overcrowded rooming-house in which she lives. She has her inside room - the room of her own thoughts and her capacity to recall and hear music in her head – and the outside room where she exists in her squalid, everyday world. Only Mister Singer exists in both worlds, again an example of my understanding of him as the book’s therapist. Life works against Mick and by the end of the novel she is a sale’s girl at Woolworth’s. At least to this reader, escape doesn’t seem very likely.

The night of our book club, seven bright, articulate women were present. Most of us loved the book and marveled at McCullers’ artistry capacity to create such a rich novel at so early an age. But the difficulty arose for some of the women who found the book too dismal, too lacking in hope. Those women felt that the message of the book was only that you lived, struggled, despaired, and then died, with nothing positive ever resulting.

I awoke in the middle of the night after our meeting and thought that we had missed something important in talking about the hope in the novel. First, there is much love, generosity, and compassion that is evident throughout the book in many of the characters, an important aspect of hope when we look at the human condition. Secondly, the book epitomizes the indomitable human spirit: To fight, despite insurmountable difficulties; to struggle, even when the outcome is bleak. To me, that is hope, providing for the eventual possibility of something better, and demonstrating humankind’s capacity for courage, strength and determination that perseveres despite all adversity.

I read The Heart is a Lonely Hunter many years ago and also saw the film in which Alan Arkin played the role of Singer. I read the novel as McCuller's paradoxical twist on giving " voice" to the downtrodden, oppressed and in one way or another, the disadvantaged of this country. Singer's position as the central character was, I thought to embody their voiceless ness in Singer who could not give voice to his own desperation and despair. The outcome of his deafness is that he was altogether misunderstood by his friends. His kind and simple personality led him to try to install himself among the profoundly suffering townspeople only to be unable to speak to his own pain and suffering and to wander the town and among the people trying to make contact in his own concrete and silent way.
It seems to me to be a story about the profound traumas of these very emotionally isolated people (in their individual ways) who are trying to find solace among one another. But, no one can really hear or understand them. They use the tools, one another, they have as best they can and hope that they can find some relief. But, their resources are limited by their focus on their own profound sense of suffering.
Antonio R. Virsida

I agree with most of what you had to say. I never saw the movie, so our slightly different sense of Singer, might have to do with your reacting to him more as he was portrayed by Alan Arkin. Although I agree that Singer is a metaphor for both his own and the other characters' voiceless despair and suffering, I definitely didn't see him as simple or concrete. In the book he writes a letter to his Greek friend - although he never mails it - that shows a profound capacity to think and understand those around him. I also don't think that he is misunderstood by his fellow townspeople. I think it is more that he is not seen, which is why I immediately thought of him as "the analyst" in the book.
And, again, although most the characters are isolated and in pain, I still think the strength of the human spirit does shine through, so that not all feels despairing.

I also read this novel as a kid but revisited it much later in life. My take on it is perhaps a bit darker, though not as dark as the consensus of your book club. The title says it all: we are all on the hunt for love and connection, but existentially we are all alone; thus the "loneliness" of the heart. To me, the various characters illuminate different aspects of this existential dilemma; Singer (note the ironic name), because he exists in silence, is a magnet for the needs of others, specifically their need to be heard (as Singer doesn't talk, he is perceived as a great listener, which he in fact is), and in that way he is like a good therapist. But the isolation that these emotionally traumatized characters feel goes beyond their individual circumstances; it is the condition of our existence. What makes McCullers a great writer is her ability to illustrate this truth through character and story.

I do think your view of the book is a bit darker than mine. I agree that the characters are all emotionally traumatized in various ways. But I also see - and perhaps I should say I persist in seeing - that McCullers captures not only the existential loneliness of the human condition, but also the possibility of connection, however impermanent it may be, as well as the determination to persevere despite adversity.

And thank you for pointing out the irony of Singer's name. Although I thought quite a lot about Singer, I hadn't picked that up.